Visiting Hoi An looks like time travel. Indeed, the city in Central Vietnam managed to keep its charm from the old days: picturesque wooden houses, fishermen throwing nets into the river, lantern lights above the river… Time stopped passing by in Hoi An and its old town, which is listed on the UNESCO World Heritage List. 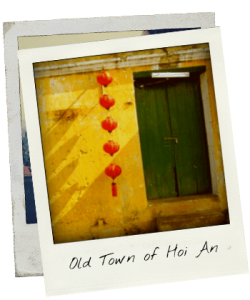 Hoi An is a peaceful and charming small city that used to be known for silk trade. That reputation somehow remains nowadays through the numerous tailor shops that stand in the streets. Hoi An is also famous for its typical architecture and its tourism. It looks like a living museum, and the Old Town is a great venue to walk or cycle around. 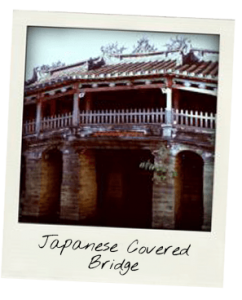 The Japanese Covered Bridge has roots in a legend. In the 16th century, a gigantic animal whose head was in India, tail in Japan and body in Vietnam, caused a lot of disasters. To avoid any more damages, people decided to build a bridge on its Achilles’ tendon in order to put it down. A little pagoda was built to honor it. More realistically, the bridge seems to have been built to connect both Chinese and Japanese quarters where most of the trade was done. Japanese built it to make transportation easier. 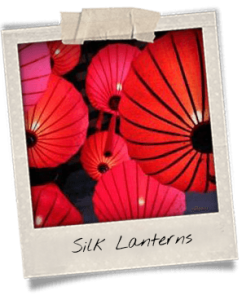 Silk lantern making is expanding. In Hoi An, you may attend the different phases of the process. In the city, lanterns are everywhere and they create a whole new atmosphere at night. It is always nice to take a walk in the Old Town in the evening. During the Mid-Autumn Festival, all electricity is shut down in the Old Town, leaving only lanterns to light your way in the streets and along the river. 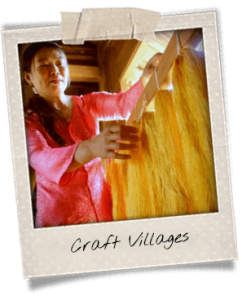 Every village has its own specialization, and craftsmanship is passed on generations. You will have the chance to visit pottery or ceramic villages, carpenters, fishermen and other agricultural occupations. Discover techniques and knowledge of every location. 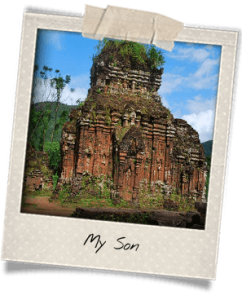 My Son is a set of ruins from the ancient Cham Empire where 78 buildings have been destroyed, mostly during the war. About twenty of them can now be visited but the three main buildings are amazing enough to content you. My Son has been listed on the UNESCO World Heritage List. Its lush vegetation, its mountains and its transparent water will surround you in a magical atmosphere. 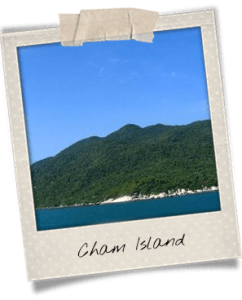 Cham Island Natural Park is a protected area that contains seven isles and islands. Mountains in the water, tropical forest, deserted beaches, but also pagodas, fishermen floating villages: a range of activities are available. Tourists may also dive or do snorkeling. Known as one of the best diving spots in Vietnam, Cham Island harbours numerous coral and fish species, along with lobsters and molluscs.

Located in Quang Nam province, the city was formerly called Faifo, which means “seaside town.” It used to be a major trade place with the rest of Asia in the 15th century. It flourished for a long time, a lot of Asian boats casting in its port every day. In the 17th century, the first Europeans (Dutch and Portuguese) showed up. After the Tay Son Rebellion, the Chinese were the only ones to rebuild their quarter, unlike the Japanese. This is why nowadays, you may encounter Chinese style pagodas and houses, but not any Japanese remain, except for the covered bridge located in the Old Town. Trade started to decrease in Hoi An while Danang’s port was getting more and more important. Later, the city was spared by bombings during war. 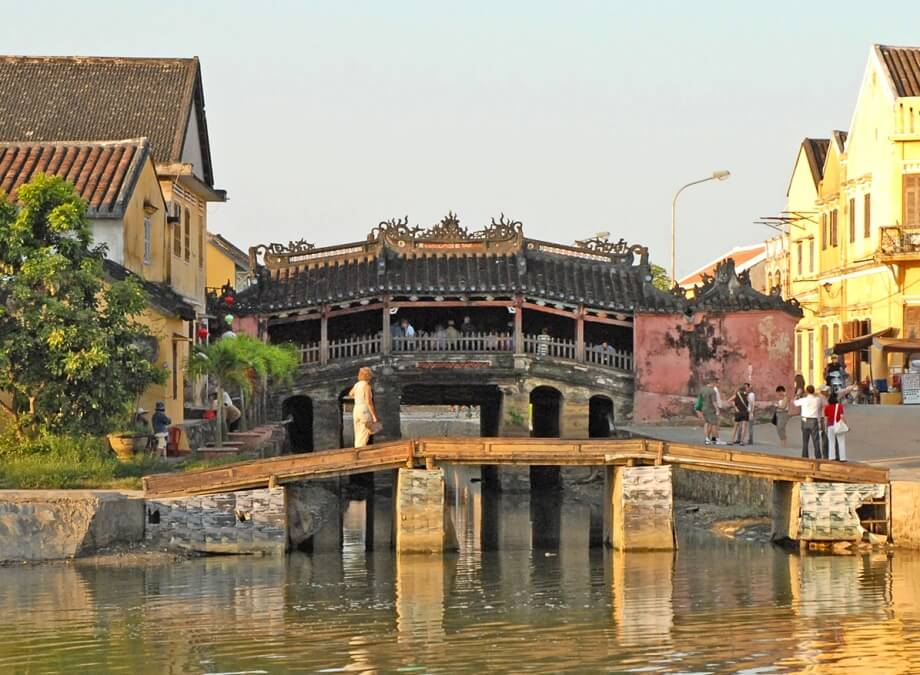 The City of Lanterns 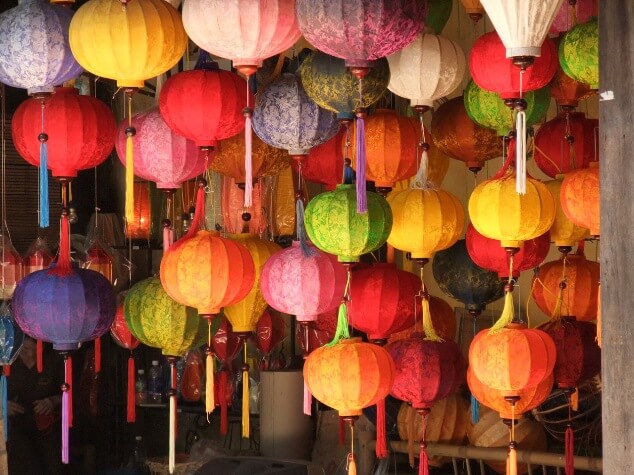 Hoi An is listed as a UNESCO World Heritage Site since 1999 because of its former status as a major trade port and its exceptionally well-preserved traditional architecture that still bears the mark of history and of interculturality.

Also referred to as the City of Lanterns, Hoi An is famous for its silk made lanterns hanging everywhere in the streets, in the shops and alongside the river. They create a very cozy atmosphere. Every month, locals celebrate the full moon and turn off the electricity for a night. Only the lanterns remain to light the city and honour the ancestors. Everyone can buy a paper-made lantern with an inside candle for the grand price of 5,000 VND and let it to the river to carry. It is also possible to buy real lanterns at the market.

The must-see place in Hoi An is the Old Town. Exceptionally well-preserved, distant from honks and engines – cars and motorbikes are forbidden there, – it comprises about one thousand monuments such as Buddhist temples, pagodas, ancient Chinese houses, mausoleums, along with the very famous Japanese Covered Bridge’s pagoda named Lai Ven Kieu in front of which stands a statue of a dog and a monkey to protect it. Indeed, works started in 1593, Year of the Monkey, and finished in 1595, Year of the Dog. The bridge’s goal was to connect the Japanese quarter to the Chinese quarter to facilitate trade exchanges. It is printed on 20,000 VND notes.

Near the river, you may have a glimpse at fishermen working, throwing their nets in the water from small boats, sampans or jonques. Cruises on the river are also possible. The city is best-known for its handicraft, especially clothes and shoes making, because of its talented and very fast tailors.

Anyone who wants to get some fresh air or see something new should go 5 kilometers away from Hoi An, on Cua Dai Beach, and enjoy a fresh coconut alongside the sea. One hour away lies My Son, where the Cham civilization was born. It is recognized as a World Heritage Site by UNESCO thanks to its temple ruins dedicated to Hindu gods. The ensemble is architecturally remarkable.

Whilst in Hoi An, you should not miss typical cao lau, Hoi An’s specialty made of noodles, pork meat, aromatic herbs, mint, soy sprouts and crackers, and served in a boiling broth. Its origins are not confirmed because this dish may have been influenced by several cultures that used to people the city (Chinese, Japanese, French…).

Be aware that it is impossible to find a genuine cao lau anywhere else in Vietnam. Indeed, its specificity lies in the water that is used to prepare the noodles: it comes from Bale’s well in Hoi An, in Phau Chau Trinh street. Water is mixed to tree ashes which results in perfumed, colored and textured noodles – resembling spaghettis and not pho’s noodles, for instance.

Have a cao lau alongside the river, surrounded by a typical setting lighted with lanterns, and create your own memory of Hoi An. 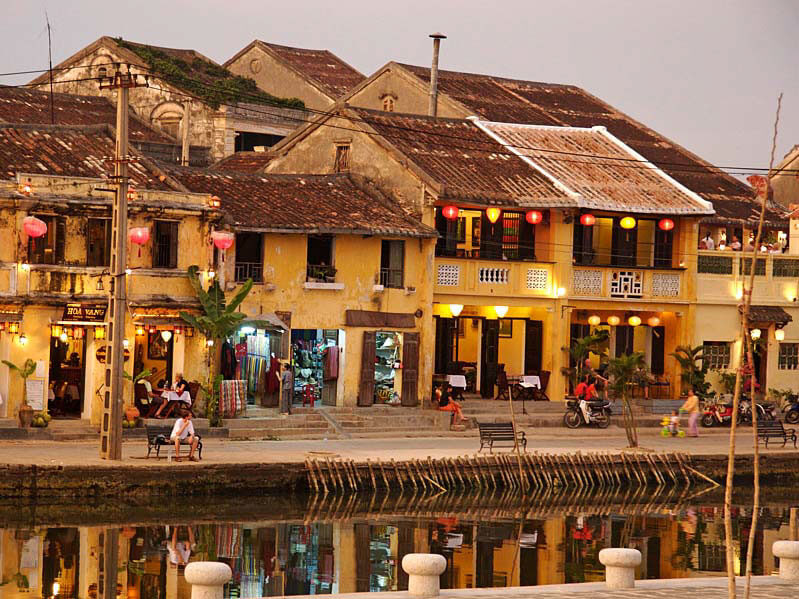