Ho Chi Minh City used to bear the name of Saigon before it was changed in 1975. It is a bustling city, a major commercial harbor and the economic center of Vietnam. This Southern metropolis which never seems to be asleep fascinates by its vitality and the diversity of its quarters.

Located in Cong Xa Paris Square in the city-center, the City Post Office and Notre-Dame Cathedral are remnants of the French colonization. The cathedral is made of red bricks imported from Toulouse whereas its roof was designed by French architect Gustave Eiffel. 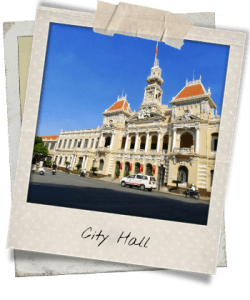 On the long Le Thanh Ton Street lies the City Hall, settled in a former colonial palace. It faces Nguyen Hue Avenue, one of the most beautiful of the city, recently renewed and opened to pedestrians. It has since become Vietnamese but also tourists’ favorite place to take a walk. 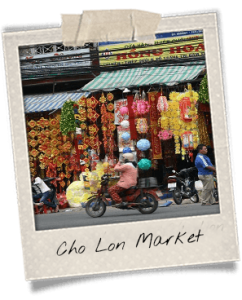 The Hoa ethnic group, Vietnamese from China, settled down in Cholon quarter in the 18th century. Its name means “Big Market” and it is the commercial center of the city. Indeed, it is the center for wholesale trade; rice, tea, copper, iron and many more flow through Cholon at some point. 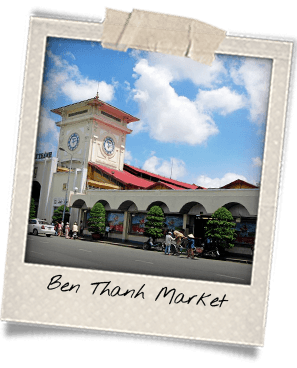 Ben Thanh Market is the oldest, the most colorful and the most animated in Ho Chi Minh City. Its architecture comprises a belfry and a clock that stand today as symbols of Saigon. Under its 28-meter wide dome, the market provides a range of different products: vegetables, meat, souvenirs, fabrics, dry fruits, clothes, arts and crafts, etc.

Thien Hau Temple is a main feature of the Chinese quarter called Cholon. The latter retains numerous period buildings, whether they are secular or religious. Those were established during the succeeding Chinese migrant waves. Streets are specialized in one specific product, whereas the Big Market provides supply to the whole city.

Some French had already settled down in Vietnam in the days of Louis the XVIth. They were missionaries whose goal was to evangelize local people. Before the French Revolution, the Treaty of Versailles was signed between Louis the XVIth and Prince Nguyen Anh, who would be later called Gia Long. Nevertheless, when the latter died, Napoleon the IIIrd decided to intervene in Vietnam. From that moment on, Saigon was occupied by the French. The French fleet landed in Saigon in February 1859.

In 1862, Tu Duc, the last emperor of Vietnam who was living in Hue, signed the Treaty of Saigon, giving Saigon and other cities that would later form Cochinchina.

Indochina War was declared in 1946 and finished in 1954 after the French got defeated in Dien Bien Phu. The Geneva accords that were signed afterwards resulted in the division of the country between the North and the South: the Democratic Republic of Vietnam VS the Republic of South Vietnam. This division marked the beginning of what Europeans call Vietnam War, and Vietnamese, American War. 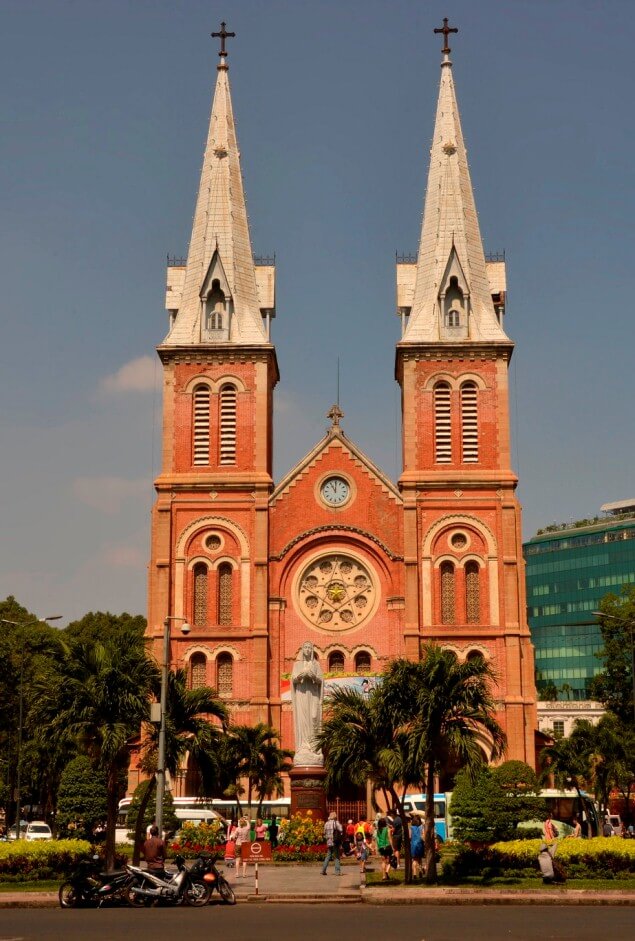 The city doesn’t bear this name for no reason. Born Nguyen Tat Thanh, the founder of Vietminh and of the Communist Party of Vietnam (1930) decided to change his name in 1941 into Ho Chi Minh, which means “Well of Light.” Commonly referred to as Uncle Ho, he issued the Proclamation of Independence of the Democratic Republic of Vietnam in 1945 in Hanoi.

In 1954, he became president of the Democratic Republic and fought against the pro-American government of the South, whose capital is Saigon. His goal was to reunite the country. He died in 1969, 2nd of September, seven years prior to the end of the war. From 1975, Northern Vietnamese changed Saigon’s name into Ho Chi Minh City.

When Vietnam was still occupied by Khmers, Ho Chi Minh City was a fisherman village and a small trade harbor called Prey Nokor, which means “Forest City,” and comprising a part of the Mekong Delta. The colonization of the area by Vietnamese settlers started in the early 17th century. Cambodians lost Prey Nokor during the Trinh-Nguyen War that first took place from 1627 to 1672 and then from 1774 to 1775. Since as early as the 17th century, Vietnamese called the city Saigon because of the name of its river.

Nevertheless, when the French settled down, they changed the name into Ségon, which was much closer to their native language. It would soon turn into Saigon, and would be modified again in 1976 to become Ho Chi Minh City, a name chosen by the Communists to refer to the Southern capital. Nowadays, the name Saigon is still used to designate the city-center (district 1) even though local inhabitants use it to refer to the whole city.

Thich Quang Duc was a Vietnamese Buddhist monk who burnt himself to death in 1963 on a busy street of Saigon in order to protest against the persecution of Buddhism by President Diem who was Catholic. That is not the only case of suicide committed by a monk, but it was given a lot of media coverage because of a picture taken by Malcolm Browne and which was broadcasted all over the world. Legend has it that Thich Quang Duc neither made a sound nor moved while his body was burning. What he did that day turned him into a hero among monks who started to worship him like a saint. His heart, spared by the flames, was kept as a holy relic.

The 1st district, the city-center, gathers the main buildings and monuments together. Among them stands the Opera House whose design was inspired by the Opéra Garnier in Paris. The exterior resembles the Petit Palais which was built in Paris the same year, in 1900, though.

The City Hall used to be a colonial palace. Today, it is one of the last French period buildings. Facing west and thus receiving the sunset light every day, it can also be contemplated during daytime. Unless you are the holder of a special authorization, you will not be able to visit the place though. You may instead take a walk on the recently renewed Nguyen Hue Avenue, which contains a massive statue of Uncle Ho, the founder of the Vietnamese nation.

The Independence Palace, also known as the Reunification Palace, was built between 1868 and 1873 by the French. The Geneva Accords were signed there and the place became the official residence for presidents of the Republic of Vietnam during the war. To be visited inside: president’s offices, conference and reception rooms, president and wife’s bedrooms, gardens…

The War Remnants Museum, located behind the Independence Palace, displays explanations about the conflict in which North Vietnam and South Vietnam got involved against each other from 1954 to 1975. The museum also features artillery such as helicopters and tanks, along with many artifacts and pictures recalling the atrocities perpetrated during the war and the effects of Agent Orange.

The Post Office is a sumptuous building whose architecture recalls some of the most beautiful monuments in Paris. It was built by colonists from 1886 to 1891. The metal roof was designed by Gustave Eiffel himself and resembles greatly the exterior of French railway stations. Inside the Post Office you will find sales counters, pictures, a portrait of Ho Chi Minh, period maps of Southern Vietnam, and a few souvenir shops. 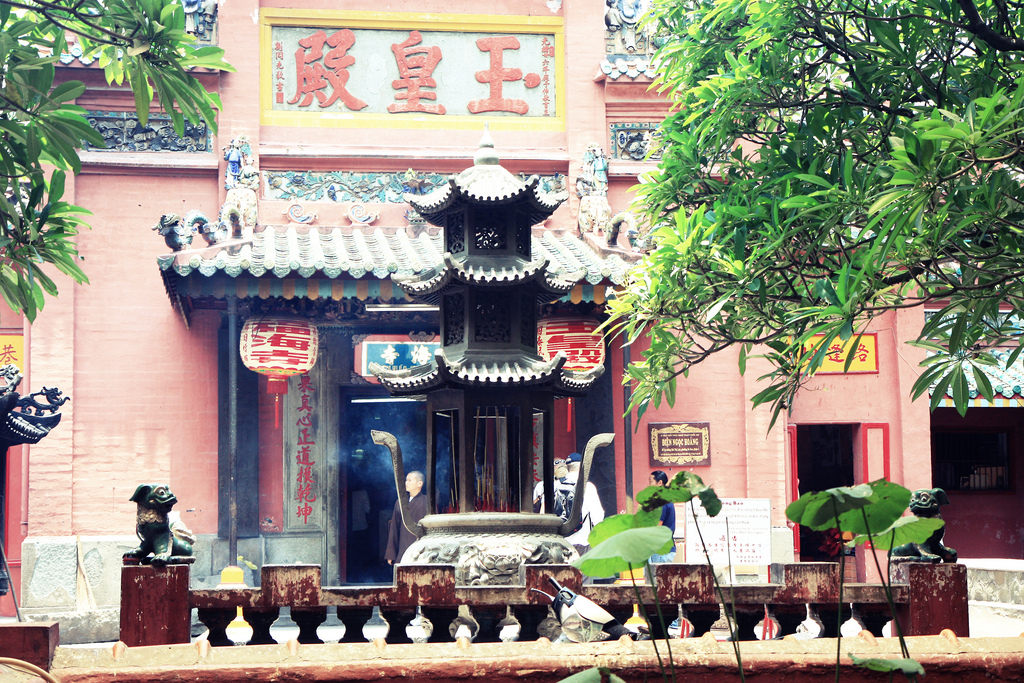 Saigon Notre-Dame Basilica, officially Basilica of Our Lady of the Immaculate Conception, was built by the French from 1863 to 1880. It is said that the pink bricks were directly imported from Toulouse.

Ben Thanh Market is the biggest and the most famous in Ho Chi Minh City. Attracting a lot of tourists every day, it displays plenty of little stands presenting souvenirs, ao dai (traditional Vietnamese outfit), conical hats along with Vietnamese specialties such as fruits, vegetables, spices… The market closes around 5 pm, but the place turns into an outside night market, stands being set up in the adjacent streets. Do negotiate the prices at any time: it is mandatory in Saigon!

The Jade Emperor Pagoda is both a Buddhist and Taoist temple dedicated to Ngoc Hoang, the Jade Emperor, and the supreme Taoist god. Its façade is made of pink bricks. Its architecture was designed regarding Buddhist myths and legends. Indeed, it comprises many statues of gods, demons and men. The main room is guarded by two 4-meter high sculpted demons. Legend has it that the temple was built where a tree got struck by the thunder. Visitors can buy small goldfish and turtles to vendors within the temple, and then release them in one of the basins as an offering.

Cholon literally means “big market,” aptly named regarding the size of its market, Binh Tay, and its stands. The Saigonese Chinatown features incent smell along with richly ornamented pagodas such as Giac Lam which comprises 113 wooden statues and 500 monk tablets. Thien Hau Temple is dedicated to Thien Hau, the Lady of the Sea. Tam Son Hoi Quan Pagoda is dedicated to Me Sanh, the Goddess of Fertility. It was built in 1839 by the Fujian Congregation of Saigon. Lots of local women go to the temple and give offerings when they are planning to have a baby. In the same area lies Quan Am Pagoda which is dedicated to the female bodhisattva Quan Am, the Goddess of Mercy. 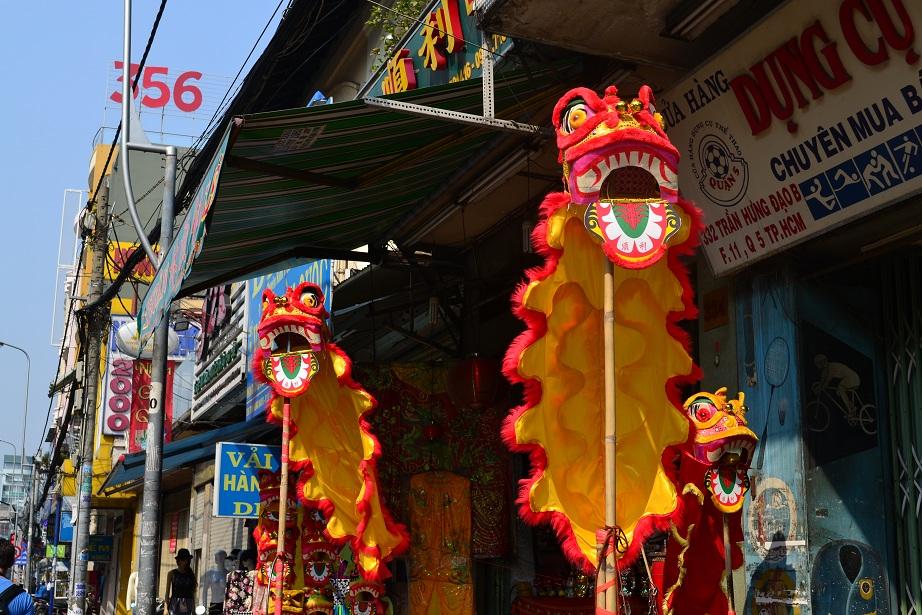 North-West from Ho Chi Minh City is Cu Chi district, where visitors may go to see remnants of the latest war. Indeed, Cu Chi comprises a network of tunnels stretching over 200 kilometers to Cambodia. Those famous tunnels were built by the Vietcong from 1948 to give shelter from American attacks but also to be used as a secret base. Up to 16.000 soldiers were living in the tunnels in very poor conditions, something that tourists may figure along the visit. In some parts, the tunnels are so narrow that it is impossible not to bend and crawl down to go further, under a tiny ray of light. Because they were slimmer than Americans, Vietnamese soldiers could easily skedaddle in the tunnels. For that matter, some entrances had to be widened for visitors. At the end of the tour, those who want to can shoot with old fire guns. 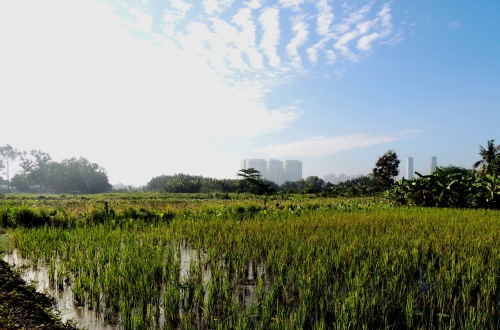 Thanh Da district offers a very different side of Saigon than the hustle and bustle of the city center. It might not be easy to believe, but you can actually find paddy and lotus fields in Vietnam’s most peopled city. No need to go to the Mekong Delta. Indeed, you just have to cross the river to find calm and tranquility, and the chance to see locals working in the fields, their heads covered with a conical hat.

One of the favorite dishes in the South may be com tam. Its name literally means “broken rice.” Though it is very rarely used, its full name is com tam suon bi cha. The latter refers to the ingredients beside rice: grilled pork (suon), pork skin (bi) and egg cake (cha). It is often complemented with mo hanh, a sauce made of onion leaves cooked in oil.

Iced milk coffee is also very popular in Ho Chi Minh City. Prepared with Robusta coffee and not Arabica, its strong chocolaty taste is sweetened by condensed milk. Crushed ice is added to the mixture and turns it into a refreshing drink that suits well the Southern heat. This type of coffee is called ca phe sua (milk) da (ice).