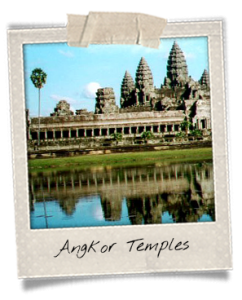 Recognized as World Heritage Sites by UNESCO, the Angkor Temples stand as the biggest archaeological site of Southeast Asia comprising remnants stretching for almost 400 square kilometers. Those symbols of Khmer architecture lie in the middle of lush foliage. 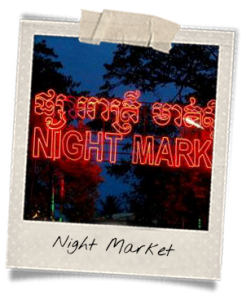 Siem Reap features several night markets. The first that was established in 2007 is Angkor Night Market. It contains about 240 shops, massage spas and even bars. BB Night Market is smaller. Eventually, Noon Night Market gives 10% of its profit to charity. 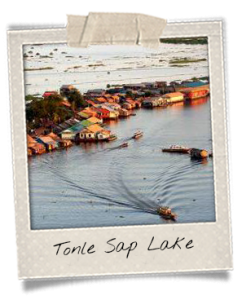 Tonle Sap, inscribed on the World Heritage List, is the biggest lake in Southeast Asia. Its soil is ideal for agriculture. It also houses many animal species. It is sometimes referred to as the “Asian Venice.” It harbours floating villages such as Chong Khneas.

Angkor has served as the seat of Khmer empire and has now become an archeological site located in the middle of the Cambodian jungle. The megacity used to be three times its current surface. The temples and ruins that can be seen today are still very impressive and show the rich history of the Khmer civilization.

Listed as World Heritage Sites by UNESCO, the monuments comprised in the complex and embedding a complicated irrigation system and basins, were successively built by the ruling kings from the 9th to the 16th century – a period of time referred to as the Angkorian period. Those dates coincide with the building and the fall of the city. Besides, Angkor was discovered by a French archeologist, Henri Mouhot.

Today, many travelers dream of getting the opportunity to visit those fascinating ruins 8 kilometers away from Siem Reap. Tours can be done either following the small loop or the big one. Being very wide, three days to a whole week are necessary to visit Angkor and catch the maximum of it. 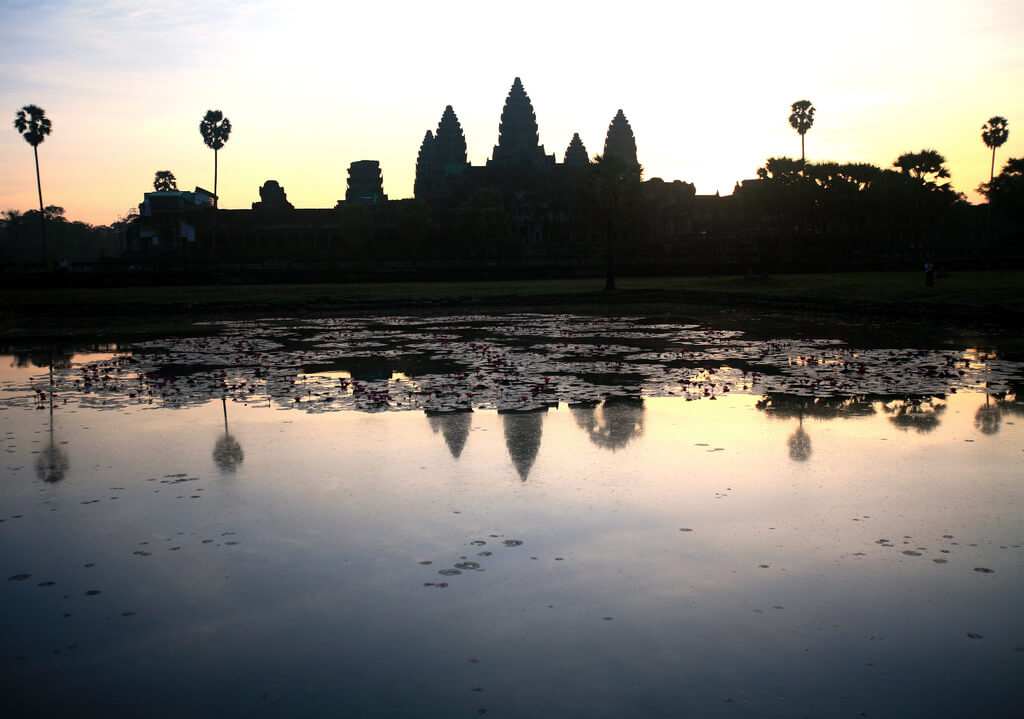 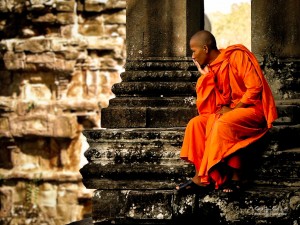 Absolute symbol of Cambodia, Angkor Wat was built by the King Suryavarman II in the 1100s. It is the most famous temple of the Angkorian complex. It comprises 5 lotus-shaped towers (or 3, depending on the viewpoint) reaching the height of 65 meters. For 37 years, 300 thousands men worked on building this magnificent temple dedicated to the Hindu God Vishnu. For that, they were helped by about 6.000 elephants to carry the tons of sandstone that were used to erect one of the most important temples in the world.

A large park separates the city’s entrance from the temple’s main entrance. Nevertheless, the architectural richness and the artistic and peaceful tranquility of the place are so impressive that once they get in, visitors may have the feeling of having traveled back in time. Statues and faces are numerous, carved in the millennial stone, such as the 2.000 Apsaras, a kind of celestial nymphs whose goal is to seduce men. They are shown half-naked and wearing many jewels and ornaments.

Other scenes are carved in the walls of that pagoda-city – illustrations of daily life but also scenes of Hindu mythology –, that confer spirituality to the place. The giant roots growing over the walls of the ruins achieve that feeling of being in another world. The highest tower of the temple is surrounded by 4 statues of Buddha, who is said to put luck upon anyone who honors him before leaving. The temple’s entrance is oriented to the west, a symbol of death in Khmer culture.

There are three preferred times of the day when you want to see Angkor Wat: first, at the sunrise, then around 2 in the afternoon and finally at dusk, when lights are going down. The temple is then wrapped in soft pastel colors. The Cambodians love it so much that its 3 towers can be seen on their national flag.

Next in line is Angkor Thom, literally “big Angkor,” a large fortified royal city, is a former town that used to stretch over 9 square kilometers and to comprise several buildings such as the Royal Palace and the Terrace of the Elephants which features sculptures of elephant processions, the animals holding a lotus-flower wrapped in their trumps. Some of those carvings are life-scale. The Terrace of the Leper King was named after the statue that stands on it and shows a seated and naked king who bears that name. The terrace also comprises carved elephants and garudas, half-bird half-human chimeric creatures that have several arms, wings, beaks, and eagle claws. Phimeanakas was where the king took breaks. The viewpoint at the top of the temple is amazing. Besides, the three-tiered temple mountain Baphuon is dedicated to the Hindu God Shiva. Not far from there, Bayon is probably one of the most famous temples of the complex. Comprising 49 carved smiling Buddha faces, it stands as the main temple of Angkor Thom. One is struck by the serenity of the stone faces that recall the path to reach the Nirvana.

Out of Angkor Thom, 38 kilometers away up north from Siem Reap, lies Banteay Srei which comprises beautiful fine sculptures. Some say that female artists could have made those sculptures, which stand as absolute masterpieces of Khmer art.

Pre Rup is a temple mountain built as the state temple of Khmer king Rajendravarman. It offers a beautiful vantage point upon the surrounding jungle and paddle fields.

Ta Som is located further from the other temples and is divided in two: an outer surrounding wall broken in gates (gopura) showing faces in the Bayon style, and an inner wall decorated with Naga sculptures, half-divine creatures often having several heads. The temple is dedicated to king Jayavarman VII’s father, Dharanindravarman II.

Preah Khan is an ancient Buddhist temple dedicated to king Jayavarman VII. It was used as a school for a while before getting turned into a temple. The architecture is flat and basic, and it revolves around a Buddhist sanctuary. 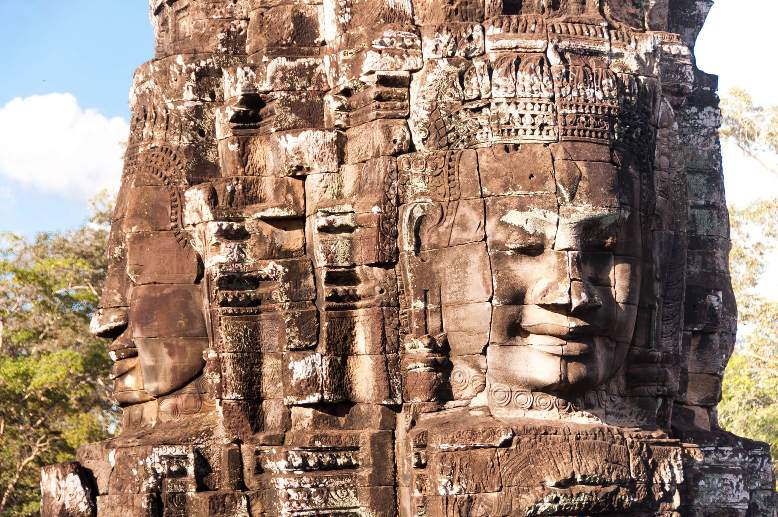 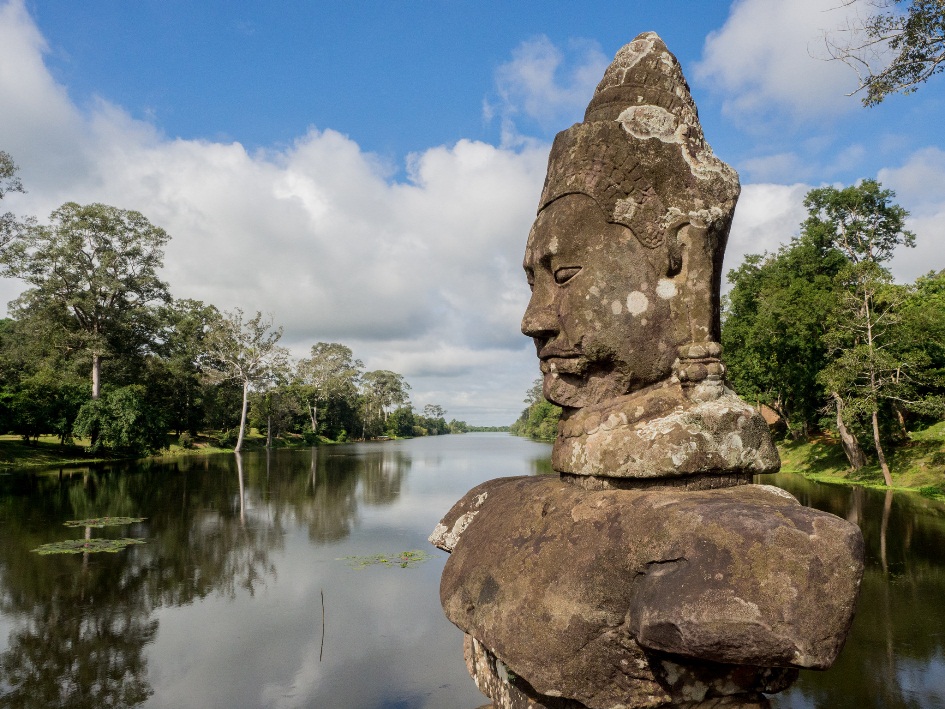 Khmer architecture is not only appealing, but also very interesting. Indeed, it is more complex than it looks. It follows certain principles, codes and beliefs that are to be sought in Hinduism and Buddhism. Angkor Wat for instance is designed to represent Mount Meru, home of gods and goddesses in the Hindu mythology.

The Role of Water

Several basins and irrigation networks were built within the city in order first to flood the paddle fields but also to stand as symbols. Indeed, Khmers believed that the presence of water around and within temples could bring them prosperity. For that matter, Angkor Thom was erected near two huge basins called baray and flooded by rain, each of them stretching over 8 kilometers. In Hindu beliefs, barays represent the cosmic ocean, which means water loaded with life that would be poured down through rain by Vishnu. This rain would bring “sweet milk” made of ashes down on Earth. This is from this milk that Apsaras are said to come. They are carved everywhere in Angkor.

Angkor was featured in several movies, including the first part of Tomb Raider, and the famous Jean-Jacques Annaud full-length Two Brothers. The latter tells the story of two tigers growing in the Cambodian jungle within Angkor’s ruins.

Throughout centuries, the kingdom of Angkor lost its splendor, mostly because of unceasing wars against neighbor kingdoms. Left aside, forgotten in the middle of the jungle that protects them, Angkor’s sites were then rediscovered and stand now as some of the most visited places in the world. 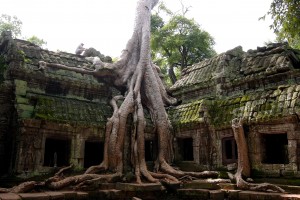