Located 95 km away from Hanoi, Ninh Binh, small green paradise, refers to a city and a province of the Red River Delta. Featuring both aquatic and terrestrial landscapes, it is also known for its huge sugar loaves that are very similar to the ones in Halong Bay. They seem to float above the rivers and water courses, and explain why the region is often referred to as the Halong Bay on land. 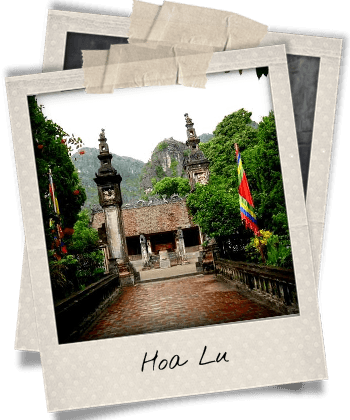 Built from 968 to 1010, Hoa Lu was the capital city three times throughout the course of Vietnamese history. Traces of its imperial past remain nowadays. Located in Ninh Binh province, it features numerous travel sites, including Bai Dinh which is the biggest pagoda in Vietnam, as well as the Sun Valley, Bich Dong pagoda, the temple of Le Dai Hanh, or the temple of Dinh Tien Hoang. Most monuments are rooted in the imperial past of the city. 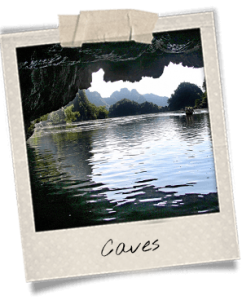 In the middle of Trang An’s verdant landscape, the river sometimes runs into dark and fascinating caves. The three most known are Ba Giot (Three Caves), Dia Linh (Holy Earth) and May (Cloud). The small boat that brings the visitor into the limestone mountains’ mouths slips quietly on the water. Indeed, the captain does not use any engine but oars. This very peaceful place stands out from the wonderful Halong Bay. 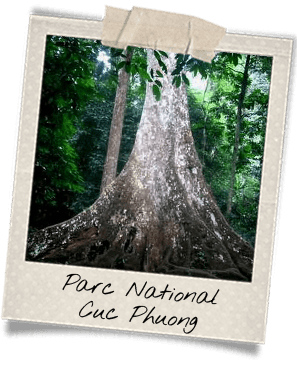 Cuc Phuong National Park is often referred to as the largest nature reserve in Vietnam. Stretching out on over 220 square km, it harbours a very diverse flora and fauna. Containing birds, snakes, eleven species of fish, and almost two hundred species of water plants, the park stands as a treasure to everyone interested in natural life. Moreover, the park shelters numerous endangered species. There, you may have a chance to see primates that are meant to disappear from the planet.

Embark for a short cruise on Ngo Dong River and wind between mounts and paddy fields. Drivers, often women, do not use their hands but their feet to paddle. They might also try to sell embroidered tablecloths, a typical souvenir of the area, to visitors. They will bring you throughout the landscapes, show you the twists and turns of the river and will go through Tam Coc and its three grottoes: Hang Ca, Hang meaning “grotto” and Ca “number 1”, referring to the “first grotto”; Hang Hai meaning “second grotto”; and Hang Ba, meaning “third grotto”. Other cave systems may be visited in the river’s surroundings, such as Trang An (50 caves in the primary forest), Van Trinh, the Buddha Cave (named after a piece of rock that resembles a reclining Buddha), or the bell-shaped Dance Cave, where you may practice some rock climbing and enjoy an amazing viewpoint above the Halong Bay on Land. 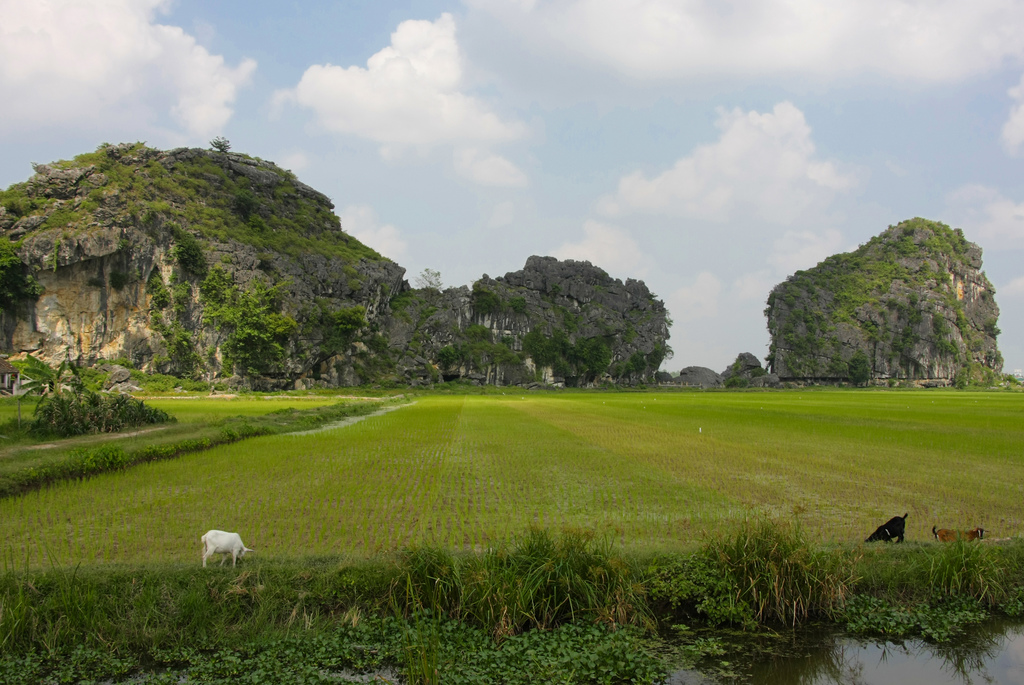 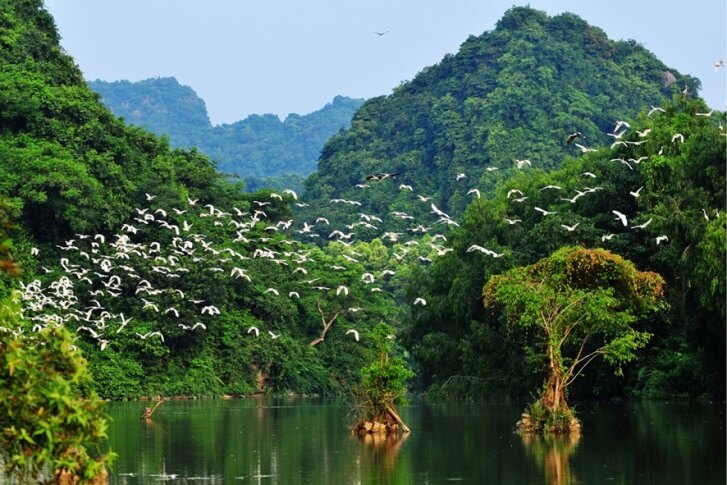 The Van Long Reserve comprises the most submerged areas of land in Ninh Binh. It harbours the critically endangered species of Delacour’s langur, along with storks. Scenic landscapes are created by reflections of the surroundings onto the surface of the river. You may want to embark on a bamboo boat for a 2 hour trip through a wonderful natural setting, and visit a little cave located right under a karst mountain.

Cuc Phuong National Park was established in 1962 by Ho Chi Minh himself. It is the oldest national park in Vietnam, and the place where the legendary Ho Chi Minh track gets its start. It is famous for being one of the last primary forests in Vietnam, featuring luxuriant wildlife flora and fauna. It is the habitat of species such as bears, turtles, leopards, monkeys, squirrels… Cuc Phuong National Park stands as a major nature reserve. It has committed itself to several conservation programs, including the Endangered Primate Rescue Center (EPRC) and the Turtle Conservation Center.

Located 5 km away from Ninh Binh, Hoa Lu was the former capital of Vietnam under the Dinh (968-980) and the Le (980-1009) dynasties, ten centuries ago. Surrounded by mounts within a valley, it gathers together two imperial sanctuaries, dedicated to kings Dinh and Le.

A few kilometers away from Tam Coc stands Bich Dong pagoda, up on the mountainside of Bich Dong Mountain. Called Nam Thien de Nhi Dong, which means the « second most beautiful cave in Vietnam », also known as Jade Cave, the place was discovered by two bonzes, Tri Kien and Tri The, who were traveling with the purpose of spreading Buddhism across the country. Once arrived at the cave, they decided to build three pagodas on three levels (Lower Pagoda, Middle Pagoda and Upper Pagoda). Later on, lord Trinh Sam renamed it Jade Pagoda, referring to the name of the cave, and to do justice to the beauty of the place. This wonderful sanctuary appeared in Indochina of Régis Wargnier’s movie as the shelter for Camille and Jean-Baptiste, hunted down by French soldiers.

A little further, Phat Diem Cathedral is also worth the trip. Its names mean “which creates beauty,” and you can easily get why. Its architecture mixes both churches’ and pagodas’ traditions. Built along a pond, the cluster comprises a bell-tower, four small chapels, a church, two grottoes as well as a white Christ statue standing on an island in the middle of the lake. Bai Dinh Pagoda is known for being a complex of a thousand year old temples within Gia Sinh city. It holds 12 national records including the biggest brass bell weighing 30 tons, and the longest corridor of Arhats statues (3 km with 500 statues, each weighing 4 tons). The biggest temple of the complex houses three golden Buddha statues standing as past, present, and future. This pagoda was built for the “cult of Heaven and Earth, of Buddha and of the celestial Angels.” Besides, king Dinh Tien Hoang used to organize sacrificial ceremonies to satisfy heaven and earth. On the way to the pagoda, tourists can visit the Sang grotto (Light), and Toi grotto (Dark), the first honoring Buddha and the second, the Mother Goddess. 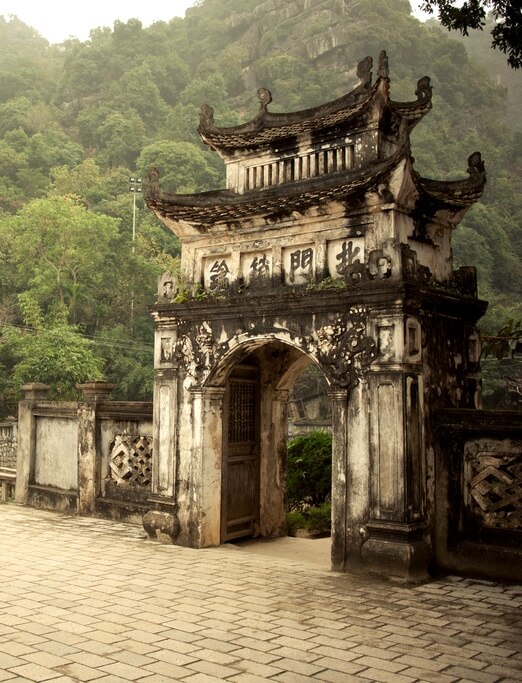 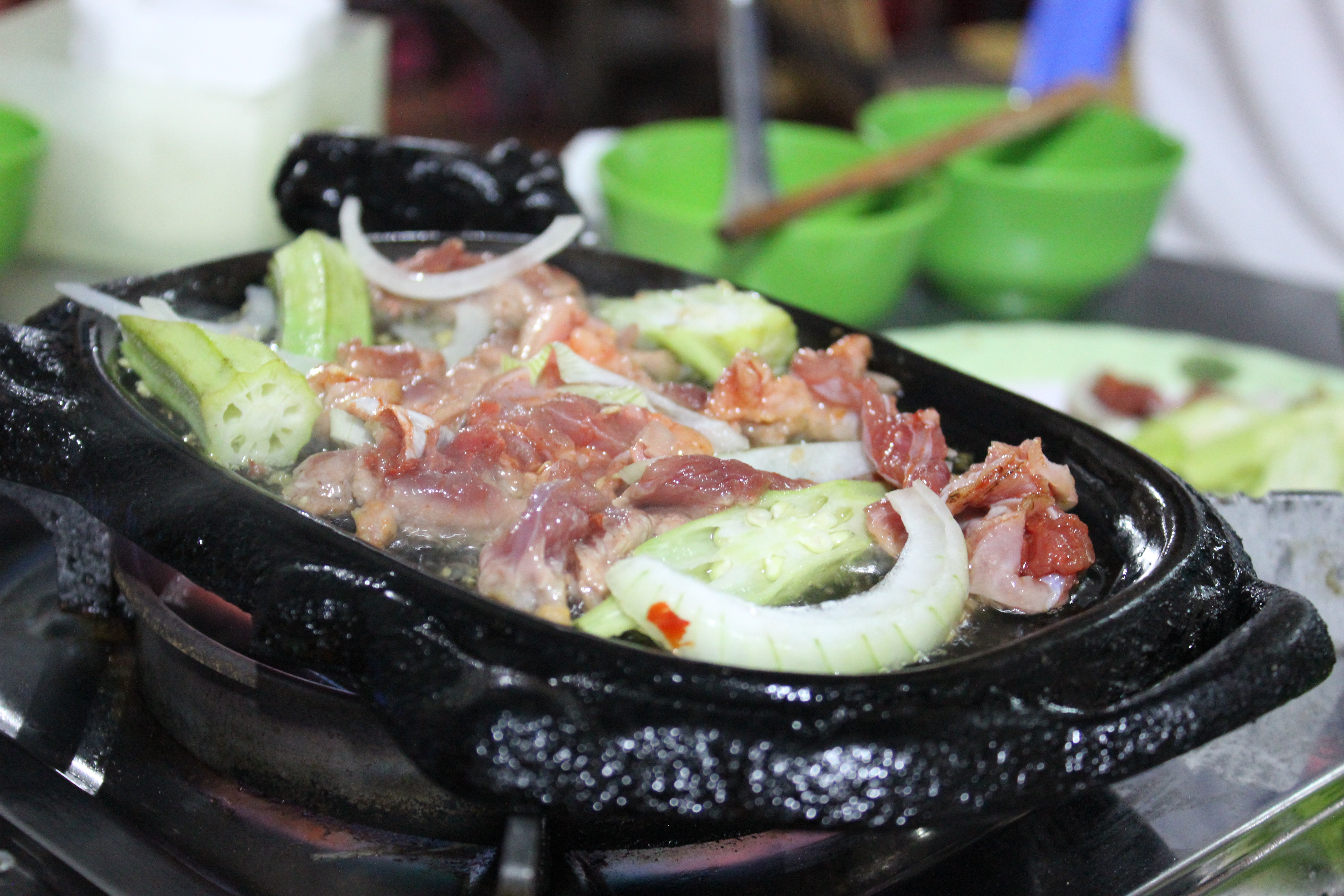 One of Ninh Binh’s specialties is goat meat. Indeed, the latter tastes much better here than anywhere in the country, because they are bred in a healthier environment within the mountains. Goat meat may be cooked in fried spring rolls, grilled or in a meat fondue. Soy sauce and small pieces of green banana deliciously complement the dish.

Com chay also stands as one of Ninh Binh’s specialties. It consists of pan-fried and sun-dried rice that is finally oil-glazed. Its crunchy makes the difference. Beef and pork heart mixed with pan-fried tomatoes, carots, onions and mushrooms are eventually added to the dish. Com chay was designated as one of the most famous specialties in Vietnam by Asian Record Organization.

Ninh Binh is also known for its rice alcohol Kim Son, which is very tasty because of the perfume and the quality of the rice used. Kim Son is the name of the district where the rice grows. It means “Mountain of gold.”