Often referred to as “Le Petit Paris” – “Little Paris”, Dalat is a lovely venue located 1 500 meters above sea level. Indochina colonialists used to go to Dalat to enjoy temperate weather and scenic settings but also tiger hunting. Dalat is one of the fanciest hill stations in Far East. You will have the opportunity to visit the Flower Park, villas, colonial cabins, the cathedral, the Pasteur Institute and so many other period memories. You may also enjoy walking around near Lang Biang Mountain or Tiger Falls. 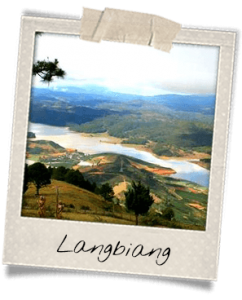 Langbiang Mountain was named after a love story that resembles Shakespeare’s Romeo and Juliet, an impossible love because of rival families. Located 12 kilometers away from the city-center, the mountain overhangs the valley and provides a stunning vista over the vicinity. 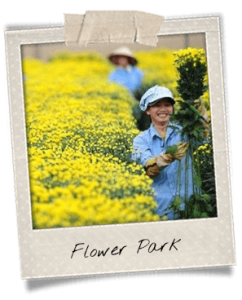 The Flower Park houses thousands of flower species and stretches for 11 hectares. Located along Xuan Huong Lake, it contains gardens, greenhouses and a typically Dutch windmill. The park displays a wide range of colors thanks to its numerous flowers, whose number extends during the Flower Festival. 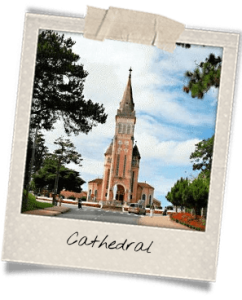 Dalat’s cathedral was obviously built during the French colonization. Erected in 1931, it increased the French touch of the city. An imposing statue of the Virgin stands right in front of the building, not far from the 47-meter bell-tower. 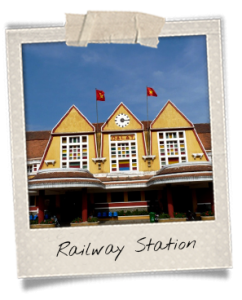 Dalat Railway Station stands out from a Vietnamese setting. Nevertheless, it merges well in the former hill station. Its main building was designed according to the Art Deco style and contains stained-glass windows. In the middle of the three spiky roofs, on the front façade, a big clock was inserted. 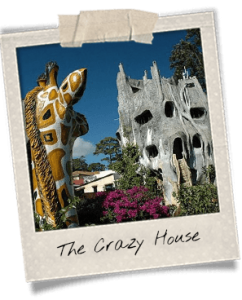 The Crazy House is a work of art that seems to have been taken out from Tim Burton’s movies. Designed by Vietnamese architect and artist Dang Viet Nga, this unconventional unevenly-shaped building was turned into a hotel and a museum. The inside is at least as crazy as the outside. 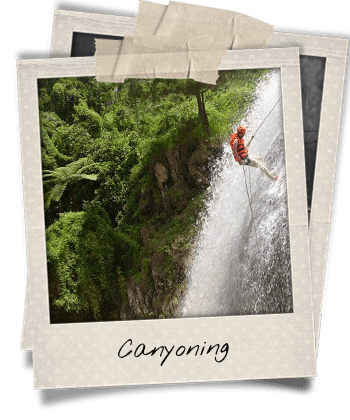 Canyoning is one of the most popular activities in Dalat. The path follows the course of a river and sometimes requires to be roped down waterfalls. This is a good way to discover another side of those mountains and to enjoy an adventurous moment. 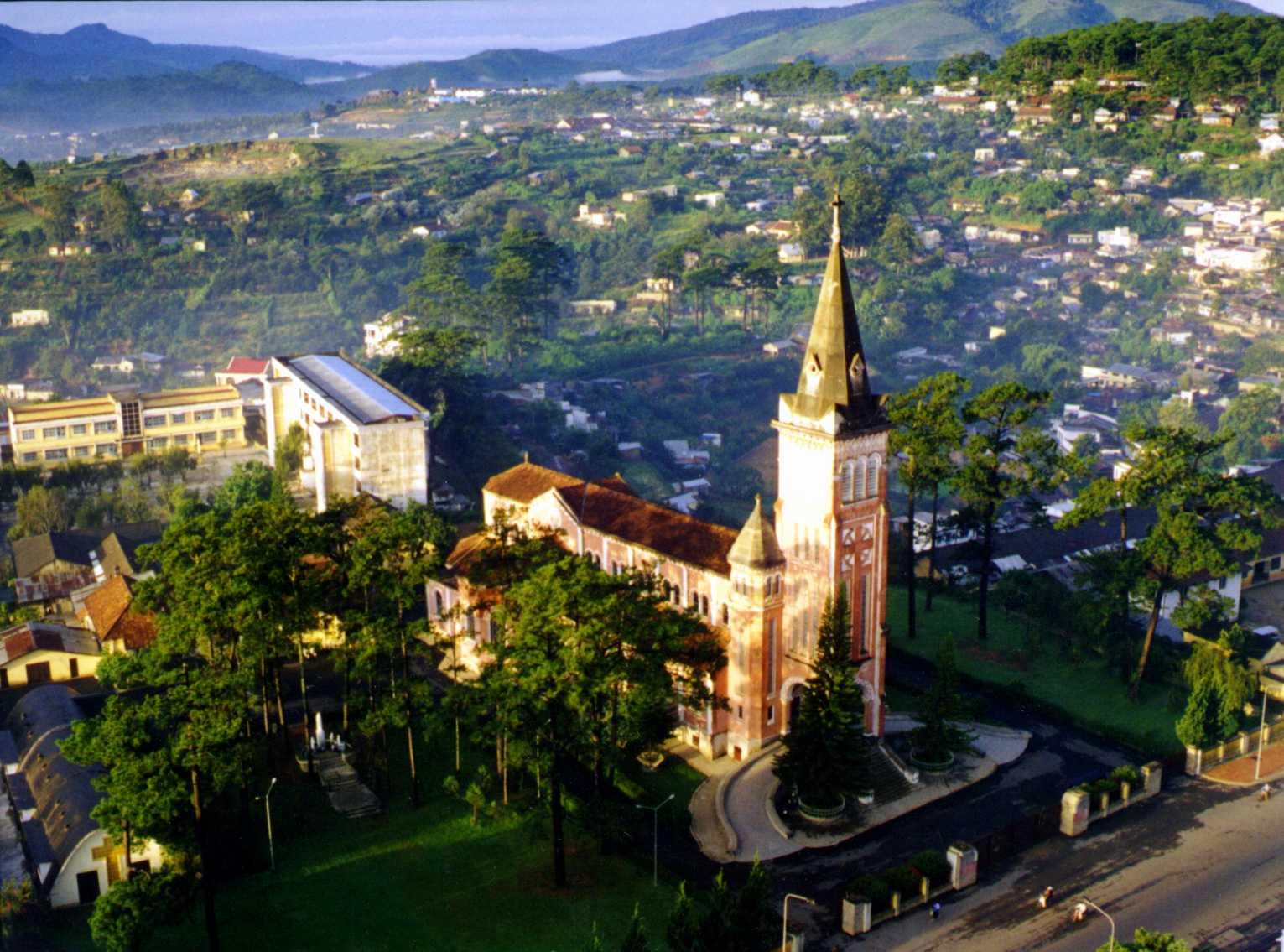 The name Dalat derived from the language of the first inhabitants, the ethnic group Lat. The river that used to cross the city was called Da Lach (da means “water”). The city was then called Dalat, meaning “the river of the Lat.”

During the French Indochina period, Dalat was already an appealing city, thanks to its temperate weather. Many French colonialists were taking retreats from hot and bustling former Saigon (Ho Chi Minh City) in Dalat. They settled down in the mountains to enjoy some fresh air. Some of them built colonial-style houses that still stand nowadays and that give the feeling of being in the middle of a fancy Parisian street. To complete the scenery, the city features a small Eiffel Tower in front of which couples like to take pictures.

Dalat supplies temperate agriculture products for all over Vietnam in terms of flowers, fruits and vegetables, its soil being extremely fertile. Those products are considered to be one of the best qualities throughout the whole country. Besides, Dalat produces many things made from fruits.

Truc Lam Zen Buddhist Temple was built according to traditional pagoda-style. It is considered as one of the most beautiful and one the largest temples in Dalat. Built in 1993 by a senior monk called Thanh Thu, the place is open to bonzes and nuns who want to pray Buddha, as well as visitors. It contains several statues of Buddha including one displayed in the main room, showing him seated on a lotus flower and surrounded by two bodhisattvas. The temple also comprises lovely flower gardens. It is accessible by cable car; indeed, the monastery is located at the top of a hill, in the middle of a pine forest.

Langbiang Mountain, located only 12 kilometers away from the city center, was named after two young people who loved each other. Nevertheless, this was an impossible love since their families were enemies. One version of the legend has it that after having got married in secret, the woman got sick and the man had to go back to his clan to seek help. When he arrived there, he got killed by a poisoned arrow. Whereas the lady was mourning the loss of her soul mate, her tears formed what is called today Dankia, the golden river. Besides, the park overhangs the surrounding valley and provides great vistas over the landscapes. 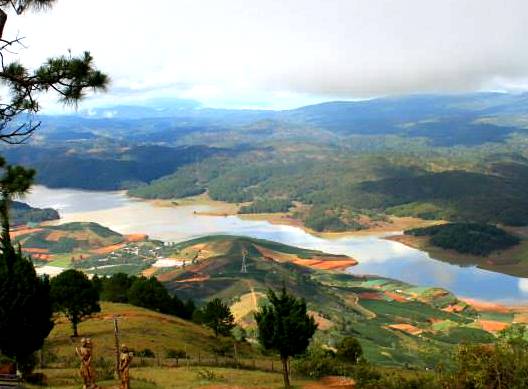 Xuan Huong Lake is an artificial lake located in the heart of Dalat. It was created in 1919 and bears the name of one of the greatest poetesses of Vietnamese literature. Xuan Huong Lake stands as one of the main features of the city, brightening up the surroundings with its calm beauty and its numerous restaurants. Take a walk along its banks at sunset or rent a boat to enjoy the vista. Up North, there is a golf course, the Dalat Palace Golf Club, which is considered as one of the best in South-East Asia. In 2009, it ranked first as the Best Golf in Vietnam two years in a row.

The Valley of Love was named by the French because of its nature: love is everywhere in this park through statues of couples, of hands exchanging wedding rings, of hearts… The setting is a verdant landscape alongside a beautiful lake where visitors can rent pedal-boats. Couples obviously enjoy talking a walk in the Valley of Love! 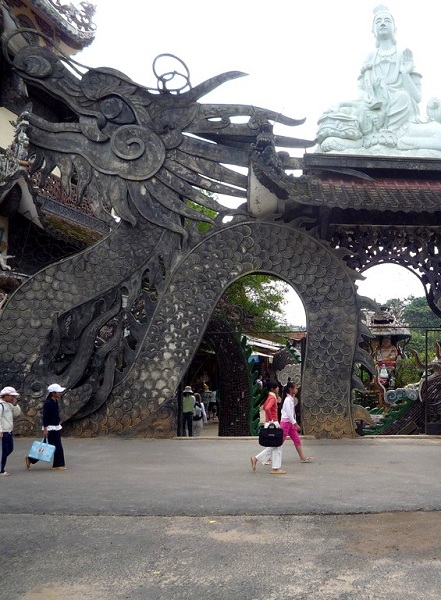 Bao Dai’s Summer Palace, from the Nguyen Dynasty, is a sumptuous villa built from 1931 to 1942 by the French living in Dalat. Decoration remained the same for the last decades. Visitors can have a look at the bedrooms, the reception halls, and the Emperor’s former office where the sculpture of his white bust is displayed, along with other smaller and golden busts of his father, Emperor Khai Dinh.

The beautiful Lam Ty Ni Pagoda features a heavy bronze bell, and flower and bonsai gardens that seem to be willing to remind that Dalat is actually a very flowery city. Some shrubs are trimmed in an animal-like shape such as dragons and griffins.

Further down, after the fruit trees, the Lake of Sighs, also known as Ho Than Ho, can be found. Its name comes from a legend which has it that a young girl met a handsome boy near the lake. They fell in love but the young man was sent to war before they could get married. It is said that he did not even have the time to tell his fiancé, and that the latter kept looking for him around the lake. Since he was not answering to any of her messages, full of sadness, she decided to throw herself in the lake. The legend has it that you can still hear her sighs in the wind today.

The Crazy House, Hang Nga, was designed by Vietnamese architect Dang Viet Nga. After classic architectural studies, she decided to let her mind speak freely and designed this uncommon house, discarding straight lines. The works started in 1990 but the house is not finished yet. Nevertheless, it is open to visitors and some parts were turned into hotel rooms so the architect could get some money and pursue her project.

Everyone has heard about the Flower Park in Dalat’s region. Indeed, flowers there are known to be beautiful and varied: at least 300 different kinds are grown, among which 100 blossom year-round. The strawberry garden is also famous: growers use another type of cultivation which allows them to grow delicious strawberries year-round. Fruit cultivation is abundant in Dalat; you may easily find strawberry jam, dried fruits and candied fruits.

In Dalat, there is also a weasel-coffee farm comprising coffee plantations and palm civets. Weasel coffee refers to the means of producing coffee. Indeed, civets are given coffee beans when the latters are ripe. Once they digested the beans, they are collected in their excrement then washed. The beans go through a last treatment before being sold. The enzymes contained in civets’ stomachs have an effect on coffee beans and change their taste into something unique.

The Dalat wine has a good reputation in Vietnam. For that matter, it is the only region that produces wine in the whole country, because it has a temperate weather and a French heritage. Red or white, the Dalat wine is sold throughout Vietnam, though consuming wine may not be a common thing here. The first grape-based wine producer lived in Hanoi but his business didn’t work. Mr. Nguyen Van Viet decided to do the same thing in Dalat that he picked for its climate and its location close to Phan Rang, where grape was abundantly grown.

In fact, the Dalat wine is not produced in Dalat itself but in Ninh Thuan, a region that gathers together 90% of planted soils of the country.

The Flower Festival takes place every other year, before Tet Festival. It is the perfect moment to exhibit local flower types and discover other regions’. Several activities were organized during the event of 2013-2014: international flower exhibition, car parade, Wine Festival. The city is ornamented with flower baskets, decorating plants and flowered bicycles… A great show and a very nice atmosphere that should not be missed by any visitors. 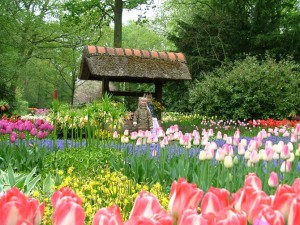