Located on the Red River Delta, Hanoi is the cultural and political center of Vietnam. Also called “the city beyond the river”, the very active Hanoi fascinates by its shady streets and historic curiosities, and has now become a worldwide place to visit. 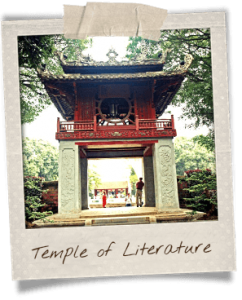 School of the elite, then Vietnam’s first national university, the Temple of Literature is the biggest of the country. Renamed as “the Crows’ Pagoda” by the Westerners, the Temple of Literature has preserved ancient architecture. Dedicated to Confucius and to his teachings, it was built in 1070. You may read the name of the period candidates carved on steles, and have a look at Confucius and his four students’ statue. You shall feel enriched by the visit of the fives courtyards and lessons of the ancient time. This place is a must-see. 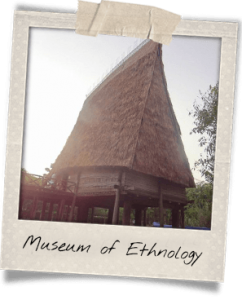 Meet the 54 ethnical groups of Vietnam and discover their daily lives through their artefacts – jewelry, weapons, traditional outfits and other typical objects. Wander in and around the created period houses in the museum’s garden, and learn their story, languages, anecdotes, techniques and customs.

The museum stands as a photograph of the country’s ethnical groups’ lives. Historically loaded, this place shall bring you back through the course of time. 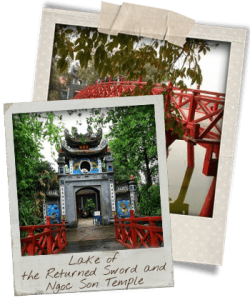 The Hoan Kiem Lake, literally “the Lake of the Returned Sword,” was named after a legendary tale which says that a fisherman was once given a magic sword by the sacred turtle of the lake in order to defend the realm. In the middle of the lake stands the Temple of the Jade Mountain, also known as Ngoc Son Temple. It houses a representation of the sacred turtle as a gigantic shell. You may access the temple through the wooden red-painted Morning Sunlight bridge. 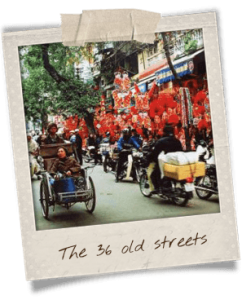 The Hoan Kiem quarter is the oldest of Hanoi. Every street used to have its own specialty, and to stand as the occupation of a whole village. You may find the Silk, Sugar, Iron, and Watch streets. This looks like a big market, and contributes to the charm of the city. You may also discover in this quarter the traditional and very narrow houses that stand on two or three stories. Fascinating! 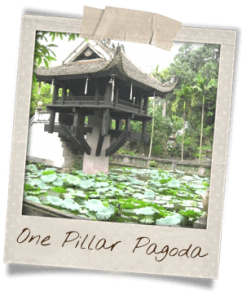 The One Pillar Pagoda, Chua Mot Cot, stands in a peaceful environment. The architecture is based on the shape of a lotus flower. Indeed, the legend says that the king Ly Thai Tong had been seeing the goddess Quan Am, the bodhisattva of compassion, in his dream, presenting the heir of the throne, both sitting on a lotus.

You may find the sacred flower by having a close look to the pagoda! 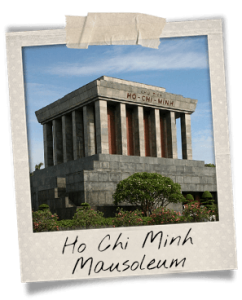 Near the One Pillar Pagoda, you may visit the Ho Chi Minh Mausoleum, located in the centre of Ba Dinh Square. The embalmed body of “Uncle Ho,” who established the Democratic Republic of Vietnam and died in 1969, is displayed in the silent central hall of the building. From this gigantic grave made of marble from Danang, you may also see the cemetery and the daily flag ceremonial. 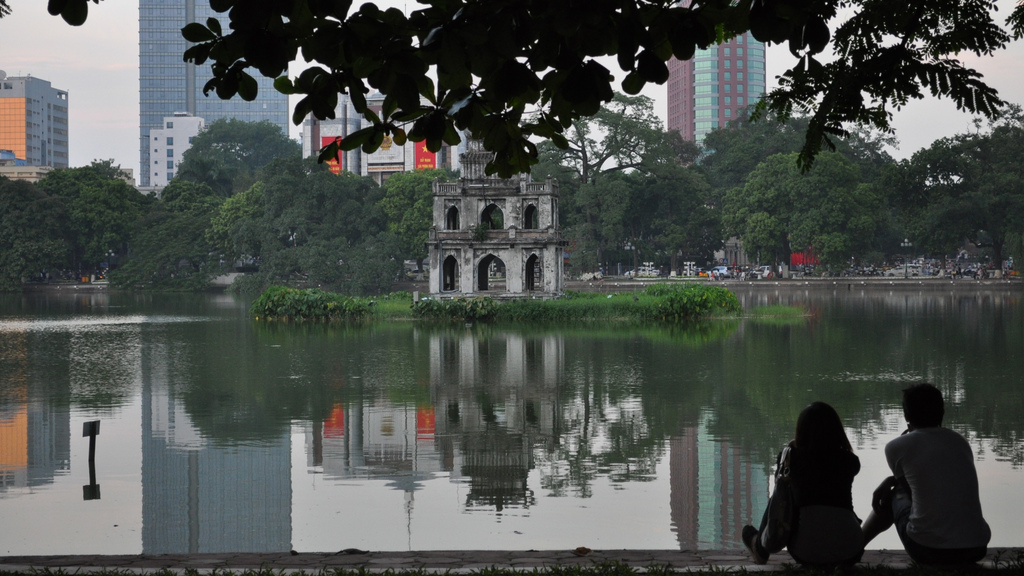 Hanoi’s history began in 1010, when the young king Ly Thai To, founder of the Ly dynasty, decided to establish the capital in Dai La (Hanoi’s former name) because of its favorable geographic situation. Legend says that while approaching the city, the king caught sight of a golden dragon flying away from the Red River, a sign of good luck. This is why Ly Thai To changed the name of the city into Trang Long, meaning “the city of the Ascending Dragon,” in opposition with Ha Long which means “Descending Dragon.”

The city remained the economic and political center of Vietnam, in spite of the reign of two other dynasties. In the 19th century, it was renamed as Hanoi by the king of the Nguyen dynasty. It played an important role during the war, and it is the place from where Ho Chi Minh declared independence in 1945, after the conflict against France and America.

Hanoi has a remarkable architectural heritage, and gets together more than 4000 temples, pagodas and other pieces of traditional architecture.

A majority of these edifices can be found in Hoan Kiem district, the old quarter, also called the “36 streets and corporations,” and is part of the country’s historical heritage. The ancient names of the streets are still in use nowadays. They stand as the specialties that were product in each of them, and as the occupation that people used to have: Silk street, Sugar street, Forges street… The quarter also houses the oldest temple of the city, Bach Ha Temple.

In this quarter you will also find the Hoan Kiem Lake, around which Vietnamese like working out. Its name means “Lake of the Restored Sword,” and refers to the eponymous legend. The latter says that the king Ly Thai To randomly found a remarkable sword in a fishing net, that he later used to conquer the national independence. A small isle in the middle of the lake recalls that legend.

Down South rises another island that you may reach through a bridge and on which you may find the Temple of the Jade Mountain, or Ngoc Son Temple. 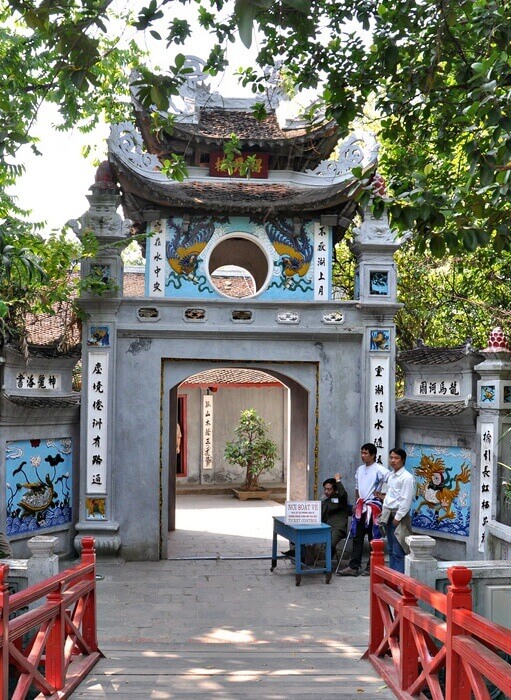 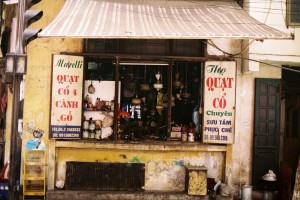 West of the city, you may find the Ba Dinh quarter, well-known for the square from which Ho Chi Minh gave his independence speech on the 2nd of September, 1945, and where rests his embalmed body, nowadays. The flag hoist ceremony is performed every day at 6 am. Also called “French quarter,” Ba Dinh stands as the political center of Hanoi, and gathers together many embassies. The quarter houses the famous lotus-shaped One Pillar Pagoda, dedicated to Quan Am, the Bodhisattva of compassion, who helped the emperor Ly Thai Tong having an heir.

Next on the list is the Hai Ba Trung quarter in South-East Hanoi. It bears the name of the Trung sisters, two war heroes who fought against the Chinese invaders from 12 to 43 A.D. They combated for 3 years and turned down many Chinese attacks. Eventually defeated, they committed suicide by drowning themselves in the Hatmon River. Their bodies were carried to Hanoi, where a first temple was erected in their honour (the Hai Ba Trung Temple, also called Dong Nhan). Nowadays, the two sisters symbolize national patriotism. The quarter itself displays big green areas, including the Lenin Park and its lake, which are ideal to get away from the city’s bustle.

In the South-West, you may find the Dong Da quarter, and the Temple of Literature, which also was Vietnam’s first college around 1076. The required level was so high that only 2 000 students graduated. Their names are carved in stone.

The Cau Giay quarter houses the Museum of Ethnology which preserves, studies and displays Vietnam’s ethnic groups’ history and culture. There, you may discover craftsmanship, customs, traditional outfits and habits. This museum is a must-see. 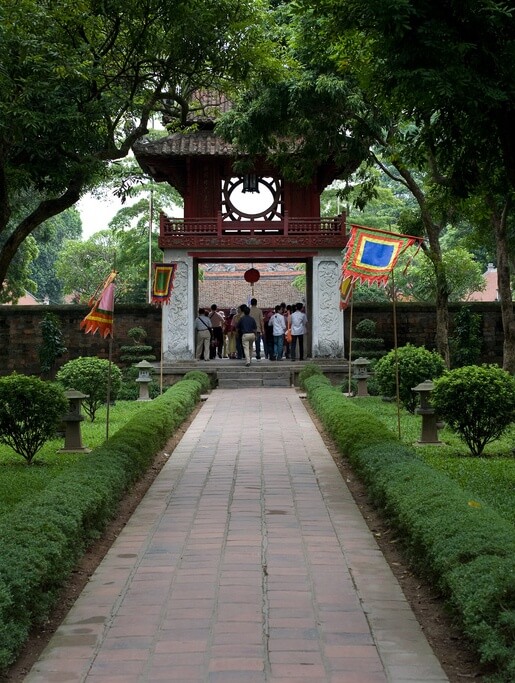 Unlike Saigon, Hanoi’s weather is made of 4 seasons throughout the year. In the winter, which lasts from December to the end of February, temperature is the coldest: 17 Celsius degrees top, and minus 10 at night. Spring, from February to April is much cooler, but also more humid. Temperatures can go from 15 to 20 Celsius degrees. This is the time of the year when trees blossom, a must-see for tourists. Then comes the summer. Temperatures may be really high, up to 35 Celsius degrees, and rain may fall very hard. At that time of the year, the weather might be very random.

The best time to visit Hanoi may be during the fall, from September to the end of November. The weather is cool and dry, and the temperatures remain around 25 Celsius degrees. Sunny moments warm the city and bring beautiful lights on landscapes. Leaves change color, contributing to the city’s appeal. 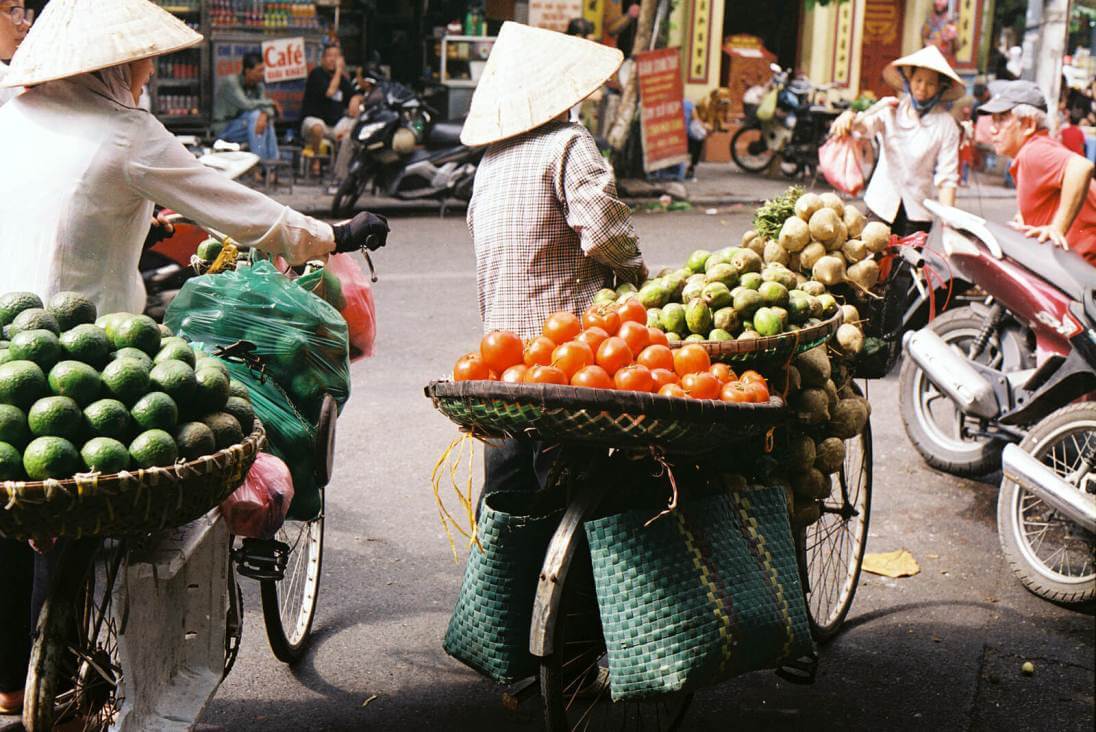 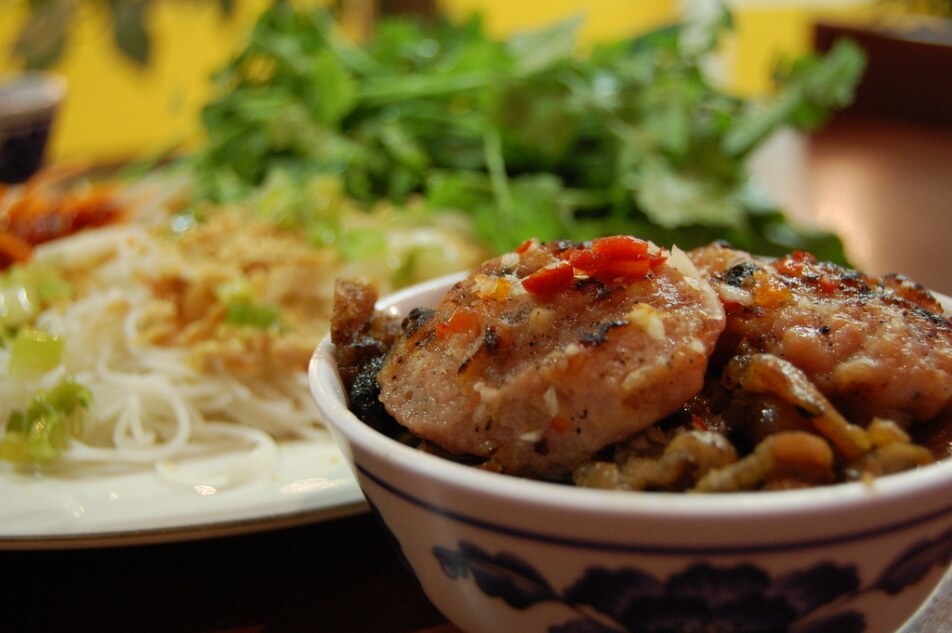 Hanoi’s most famous dish may be bun cha. Made of barbecued pork, it resembles a soup, and it is served with rice noodles, herbs, salad, and nuoc mam sauce.

Cha ca va long also stands as one of the city’s specialties. It is made of grilled fish, dipped in perfumed oil, and includes rice noodles, aromatic herbs, roasted peanuts, and shrimp paste (mam tom) or nuoc mam sauce.

Hanoi’s inhabitants like banh cuon very much, especially for breakfast. It is a kind of rice pancake stuffed with pork meat, black mushrooms and onions. The dish is usually served with fried shallots, soja sprouts and a few herbs such as basil.