Listed as a UNESCO World Heritage Site, the Halong Bay is one of the New 7 Wonders of Nature and a popular travel destination. It stretch out on 1553 square km in the Gulf of Tonkin, and features 1 969 islands and isles, most of them uninhabited. The place’s notoriety rose when the movie Indochina hit the screens in 1992.

Among the most beautiful bays of the world, it is the perfect place to mix adventurous experience and relaxation. You may enjoy an outside breakfast, a barbecue on a deserted beach, and many others on the “descending dragon.” Discover fishing villages, meet people living in floating villages, and swim amid transparent water, and explore amazing caves. Wonderful memories guaranteed! 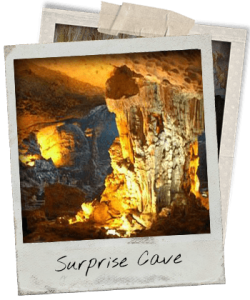 Located inside Bo Hon Island, Surprise Cave is also known as Sung Sot Cave. Named Surprise Cave by the French, it features thousands of stalactites and stalagmites. It stands among the biggest caves of the bay. Its 30-meter high ceiling, its colors and its beauty contribute to its magic. You may reach the top of the cave at the end of the tour and contemplate the viewpoint above the jetty where the boats are moored. 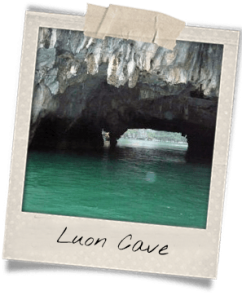 Luon Cave is a 60-meter long cave that looks like a tunnel. It is the best place to enjoy a quiet atmosphere on the water. You may access the splendid lake by small boat or kayak. Don’t forget to bring your swimsuit, and meet the magic of this place while having a bath in an emerald-colored water. 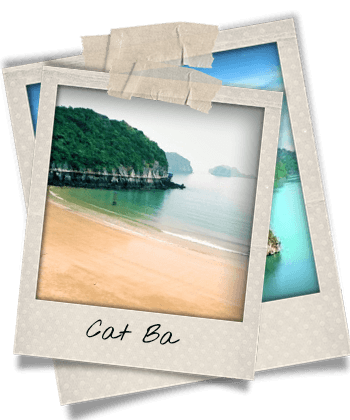 Cat Ba, the biggest island of the Halong Bay features different kinds of outdoor activities: hiking, rock-climbing, kayaking, cycling, that you may practice in a natural environment. Mangroves and lakes stretch out from tropical forests and rocky landscapes. You may also discover fishing villages, creeks, and the wonderful biodiversity of the Vuon Quoc Gia Cat Ba park. 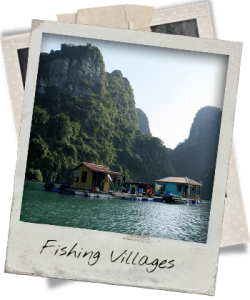 Fishermen living in Cua Van village built their houses in the Halong Bay, in a floating village gathering together 650 people, and 130 floating houses. This is the biggest village of the area. It also features a school and a clinic… which are both floating, of course! 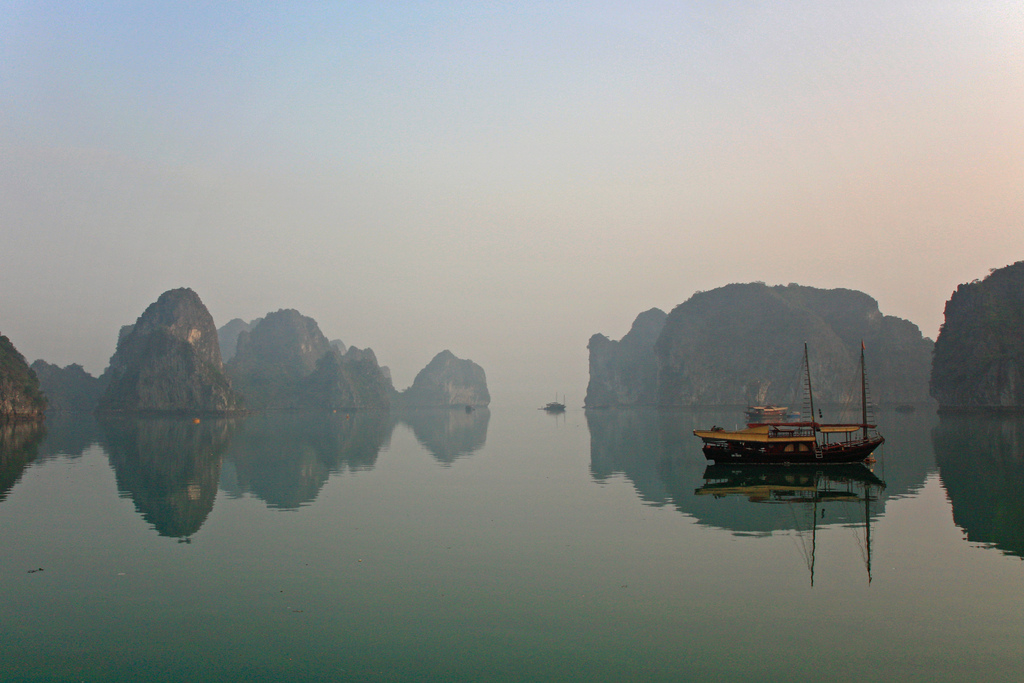 “Ha Long” means “descending dragon” in ancient Vietnamese. This name comes from a legend. It has it that a dragon came down on the sea to tame the current, but damaged the mountain with its tail while struggling, creating limestone karst and craggy islands by thousands on an emerald sea. People say that this specific color is due to the skin of the dragon, still lying on the seabed.

Many conflicts took place in the Halong Bay. It is said to have been a shelter for pirates in the 18th century. Later, it was mapped by the French during colonization, who named some islands and caves. This is why lots of them have French names.

The biggest island, which is also the most famous, is Cat Ba: located in the South-West of the bay, it is known for featuring the Vuon Quoc Gia Cat Ba national park, that stretch out on one third of the island. The park presents impressive primitive forests including a diversified fauna. The island also features some beaches with crystalline water, caves, fishing villages, and a panoramic view on the Lan Ha Bay. This bay is part of Cat Ba archipelago and includes some 400 isles, which makes it Halong Bay’s “little sister.” A cruise along the seashore of the island is possible.

The Halong Bay has other treasures that deserve to be seen, like its caves, art museums with remains from the past. Among the most famous ones, there is the Wooden Stakes Cave or Hang Dau Go on Dau Go Island. It is said that the General Tran Hung Dao took shelter there in the 15th century, and hid spears that were supposed to be used to push back the Mongols. This legend would explain the current name of the cave. On May Den Island can be seen the beautiful Three Palaces Cave, also known as Tam Cung Cave, where visitors may see statues and lively images of gods and animals on the walls. Another cave that must be seen is the Heavenly Palace Cave (Thien Cung Cave). The legend has it that the wedding of May (“Cloud”) and the Dragon Prince was held in this cave, during 7 days and 7 nights. The animated atmosphere of the wedding was drawn on the walls of the cave, featuring dragons and dancing elephants. In the middle of the cave, 4 pillars support the ceiling, often referred to as “the roof of Heaven.” Surprise Cave (Hang Sung So), on Ti Tov Island, may be one of the most attractive caves in Halong Bay. It was named among world top ten most beautiful caves in the world by the Association of Tourism Offices and Brokers of the Czech Republic. 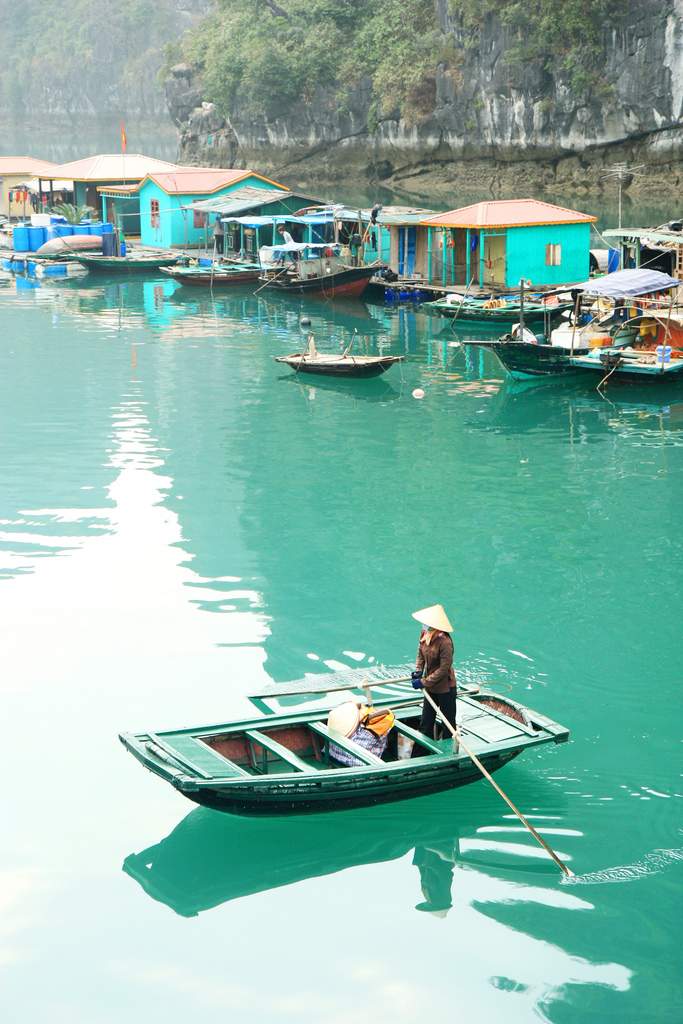 Things To Do in Halong Bay 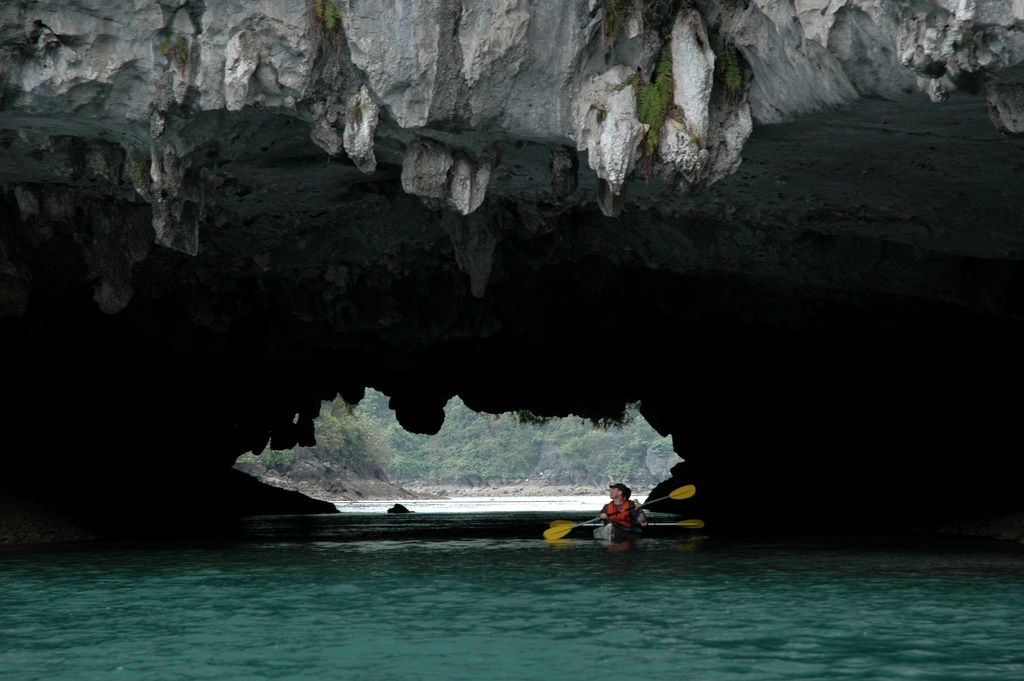 Unlike what we could think, cruising is not the only activity within the bay. Kayaking, trekking, rock climbing, fishing, visiting floating markets and pagodas, as well as fishing villages, there should be something for everyone! In the surroundings of Halong Bay, Bui Tui Long and Lan Ha bays can also be explored. The small Ti Top Island features a half-moon shaped beach, and a wonderful viewpoint above the Halong Bay, for anyone who feels like making the effort to climb to the top of the island. Besides, cruising on a jonque is one of the best way to enjoy the wild beauty of one of the most beautiful bays in the world. Whether you are looking for adventure or serenity, Halong Bay, as described as a “marvel of the earth erected towards the high skies” by poet Nguyen Trai, will certainly make your travel experience unforgettable.