Near the border with Thailand, on the banks of the Mekong River lies Vientiane, capital city of Laos. With about 850,000 inhabitants, it is one of the smallest capitals in Southeast Asia, even though it is willing to evolve since the last few years. Its name means “city of sandalwood.” Vientiane is a quiet city, offering a laid-back ambiance and a style that recalls its colonial past. Indeed, the architecture features large avenues, a riverfront walk and villas comprising sumptuous gardens, that all are remnants of the French colonization. At a period of modernity such as ours, Vientiane is becoming more and more agitated, and new technologies are to be seen in the same setting as the local traditions, a very interesting show that will tend to disappear. 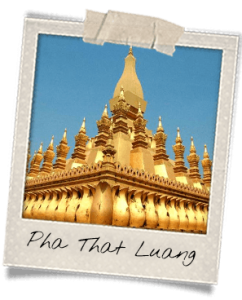 Considered as the most important national monument in Laos, Phat That Luang consists of a golden stupa about 4 kilometers of Vientiane’s city-center. It is surrounded by a 85-meter cloister and contains various Buddha images. Legend has it that the temple would have been built to enclose a piece of Buddha’s breastbone brought from Indian Emperor Ashoka’s missionaries in the 3rd century BC. 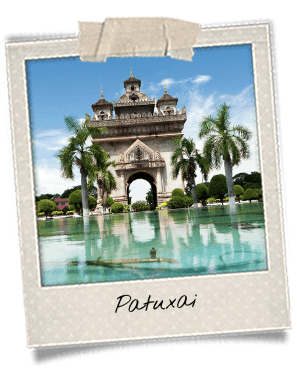 Patuxai is a commemorative monument which resembles the French Arc de Triomphe. Built in the 1960s, it used to bear the name Anousavali, which means “memory” and was dedicated to the Laotian soldiers who had perished in prerevolutionary wars. When the communist Pathet Lao got to rule the country, they named the monument Patuxai, which means “Victory Gate.” Visitors can climb on top of it and enjoy panoramic views over Vientiane. 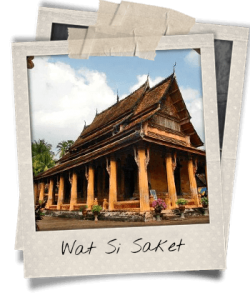 Wat Si Saket is a religious complex built by king Anouvong between 1818 and 1824. It is considered as the oldest temple in Vientiane. Its architecture is based on the Thai style that used to be called Siamese style. Because it was built following those architectural principles, the temple was spared during the sack of the city by the Siamese armies in 1828. Wat Si Saket is also known for its 2,000 ceramic and silver Buddha images displayed everywhere in its cloisters. 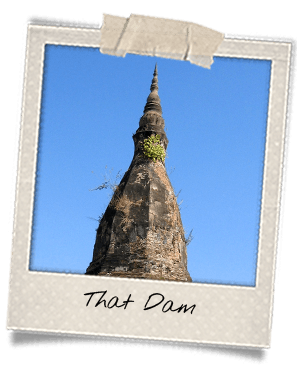 Its name means “black stupa” and comes from its color. Indeed, That Dam is an abandoned black building in the city-center, on which foliage grows wild. Legend has it that it would be home of a seven-headed dragon, protector of the city, but that still couldn’t help the sack of Vientiane by the Siamese in 1828. The building is also said to have been once coated in a layer of gold, and then carted by the Siamese armies. 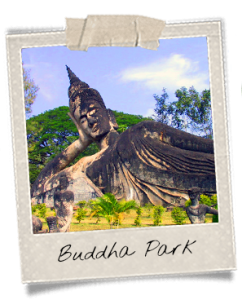 25 kilometers of Vientiane’s city-center lies Xieng Khuang, a name that means “spirit city” and which is usually called Buddha Park. It was built in 1958 by a monk named Luang Pu Bunleua Sulilat who, according to the myth, wanted to mix Hinduism and Buddhism. The park encompasses over 200 variously-sized Hindu and Buddhist statues within a very green setting. The most impressive sculpture may be the concrete over-20-meter long Reclining Buddha.